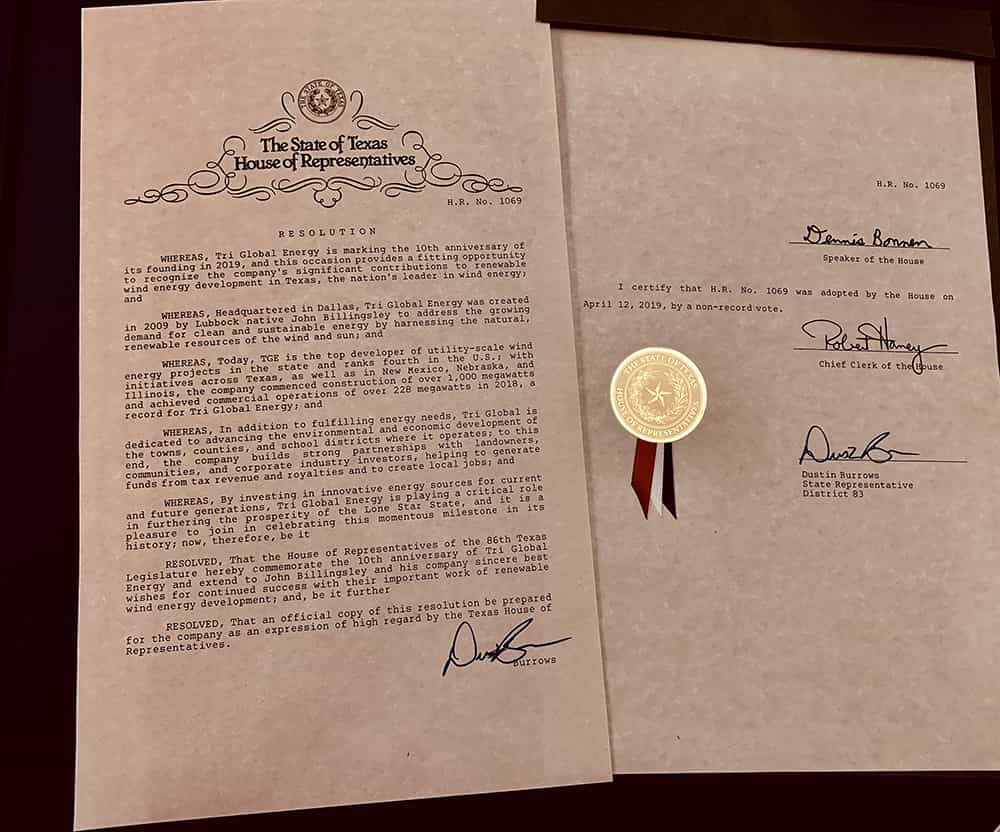 DALLAS (May 23, 2019) – The Texas 86th Legislature has passed Bill TX HR1069, officially recognizing Tri Global Energy, the Dallas-based company that has become a national leader in the development of clean, renewable wind energy. Tri Global Energy is celebrating its 10th anniversary in 2019, and in that time, the company has grown to become the fourth largest developer of utility-scale wind projects in the U.S.

Tri Global Energy (TGE) also has ranked consistently as the top developer of wind power in Texas and in 2018, achieved company records for projects beginning construction (1,000 MW) and projects achieving commercial operations (over 228 MW). Texas is the number one wind energy generator in the country, producing one-quarter of the national total and nearly 17% percent of all in-state electricity generation. If Texas were a country, it would rank number four in the world in total wind energy generation.

The TGE Resolution, sponsored by Dustin Burrows (R-Lubbock-District 83) notes Tri Global Energy’s role in advancing the environmental and economic development of the towns, counties, and school districts where it operates, building strong partnerships with landowners, communities and corporate industry investors, creating local jobs and helping generate funds from tax revenue and royalties. (To date, the company’s wind farms are located primarily in West Texas, although there have been projects in New Mexico and new projects are in Nebraska and Illinois.) Additionally, the bill calls out Tri Global Energy’s critical role furthering the prosperity of the Lone Start State by investing in innovative energy sources for current and future generations. (See the entire text of the bill at https://legiscan.com/TX/text/HR1069/id/1979114).

Tri Global Energy was launched by West Texas native and landowner John B. Billingsley, who remains as Chairman and CEO.  One of the company’s distinguishing points-of-difference is its Wind Force Plan, which opens participation in the wind project to the community, instead of limiting participation to landowners only. “Growing up on a cotton farm, I saw the development of wind projects in West Texas, but I also knew first-hand the deals favored the developer, not the community. I thought there had to be a better way, and our Wind Force Plan is the model we have used to develop every one of our projects over the past 10 years.”

Among the many wind projects initiated by Tri Global Energy since its founding include: