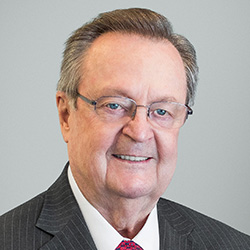 John B. Billingsley is the Founder, Chairman and CEO of Tri Global Energy, LLC. John has been widely recognized as a pioneer and industry leader for his vision and contributions to the development of renewable energy in Texas and the U.S., including by the Texas Legislature, the U.S. Congress, and the White House for the American Business Act on Climate.

In 2009, after being approached by a wind energy developer and realizing the traditional business model needed improvement, John established Tri Global Energy. For this venture, John also created a unique business model, The Wind Force Plan, that allowed him to lease 650,000-670,000 acres of West Texas land in fewer than three years. (The appeal of the Wind Force Plan was that it guaranteed payments to landowners and investors upon project development, whether or not wind turbines were placed on their land.) This land would be developed into multiple wind farms, and later solar farms. In fact, one Tri Global Energy project, resulted in one of the largest community-owned wind farms in America. Hale County Wind Farm, Cotton Wind Farms, Lakeview Wind Farms and East Mound Renewable Energy were combined in 2013 to form one Hale Community Energy LLC with the potential to generate more than 1,200 megawatts (MW) of renewable energy.

Today, as a developer of utility-scale wind, solar and energy storage projects in Texas, Illinois, Indiana, Pennsylvania, Virginia and Nebraska, Tri Global Energy is the top-ranked wind energy developer in Texas and among the leading wind developers nationally and globally. The Tri Global Energy proprietary business model created by John has achieved success through partnership with local communities. Tens of millions of dollars of start-up development capital have been secured for more than 36 wind projects involving over 3,500 landowners and investors. And over a period of 30 years, an estimated $9.0 billion will have been returned to the local communities through school, county, and other taxes through capital investment.

A life-long entrepreneur, John’s decades of business experience include the creation and management of more than 20 businesses. Formerly, John was a co-founder and Managing Partner of Billingsley, Johnson Kubica & Co., a large regional Texas CPA firm that later merged into Arthur Young, one of the nation’s major CPA firms. His diverse experience also includes stints in banking, as well as owner/president of an oil and gas exploration company, owner/president of a sulfur recovery plant, owner/president of a commercial real estate development company, owner/operator of two commercial cattle ranches and the owner/president/CEO of two middle-market manufacturing companies, each with over 250 employees.

John graduated from Texas Tech University with a bachelor’s degree in Business Administration and a major in Accounting.